Raclette – A Cheese for All Seasons 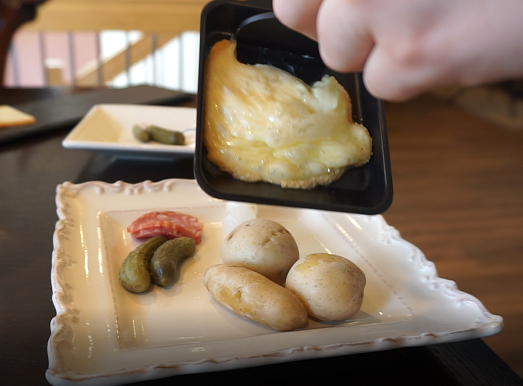 Welcome to our Swiss Kitchen. Today we’re talking cheese—but not just any Swiss Cheese. This is raclette. In some parts of Switzerland, raclette is more than just a cheese—It’s a religion—a very delicious religion. When we say “raclette” it can refer to both the cheese, and the meal centered around raclette cheese. It isn’t a cheese you snack on and you’d never see it on a cheese board. It’s served only as a meal.

Raclette cheese is a semi-soft cheese made from raw cow’s milk. It’s normally aged six months to produce its rich, fruity, savory flavor. It originated in Switzerland’s Rhone Valley in the canton of Valais, but today, it’s produced throughout Switzerland.

What’s in a name?

Raclette is a tradition that dates to the thirteenth century. The name “raclette” comes from the French word “racler”, meaning “to scrape.”  It’s a perfect melting cheese. Traditionally, raclette was served by melting the wheel of cheese in front of an open fire and scraping the melted cheese onto a plate

When raclette is served in a restaurant, they usually have a half wheel of cheese set in a cradle and broiled under an electric grill. When the surface of the cheese starts to bubble and begins to turn a golden brown, the racleur takes a knife and scrapes off the top layer of melted cheese and drops it onto your plate. In some traditional restaurants the raclette is melted in front of an open wood fire and the cheese tastes even better as it picks up the smokey aroma.

If I’m serving raclette at home, for just two of us or a few friends, we couldn’t possibly consume a whole wheel of cheese, so I go to a grocery store and purchase by the slice—called a tranche. It’s a single serving of raclette sold in a package of about 10 tranches. At a raclette dinner, each person might consume three to five tranches or servings of raclette at the meal. As it turns out, each tranche weighs about an ounce.

Most Swiss homes have a tabletop grill that looks something like the image below. It might be a two, four, or six-burner grill where my friends will sit around the table and engage in lively conversation while each person grills their one tranche at a time.

Here’s how you do it. Just put your tranche on the small tray then place it under the grill. Wait about three minutes until it starts to bubble and turns a golden brown on top. Then pull it out and use one of these handy pushers to slide the melted goodness onto your plate. Raclette is eaten with piping hot potatoes, typically accompanied by cornichon and pickled onions. The Swiss like small potatoes. They say, “The bigger the potato, the dumber the farmer” You see, it takes a smart Swiss farmer to grow great tasting small potatoes.

Where to find it

Whenever I return from Switzerland to the US, I always stuff several kilos of raclette in my suitcase to bring back home.  But fortunately, it is becoming easier to find in most cheese stores and in the deli or cheese section of large grocery stores. You can buy tranches like this at Trader Joe’s.  In fact, I see it sold by the wheel on Amazon. And home grills can be found at specialty kitchen-ware stores like Williams Sonoma or Crate and Barrel. They’re also available on Amazon.

So next time you want to have a traditional Swiss meal with friends, with a fun, participative, festive touch, plan on doing raclette.

If you want it straight from the source, come join us in the Alps!