Hannibal and His Route Over the Alps 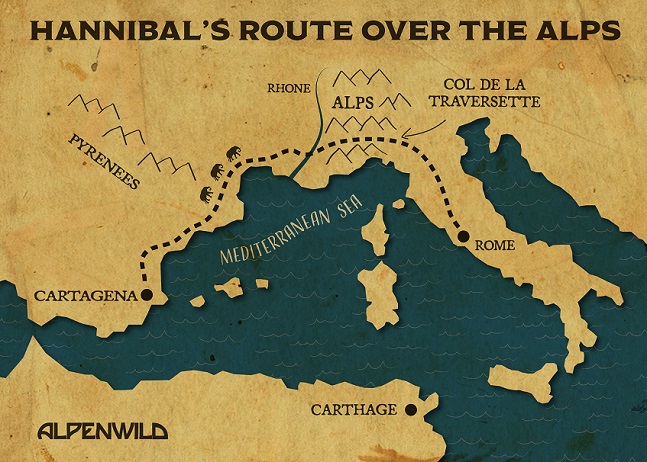 Every Alpine pass tells a story. As millennia of merchants, soldiers, and pilgrims crossed Alpine passes, they left cultural footprints in the snowfields and meadows of the Alps. But details of the greatest Alps adventure in history— Hannibal crossing the Alps with his war elephants, horses, mules, and thousands of soldiers—remains shrouded in mystery. Only now are we beginning to uncover the route and the precise pass he crossed to pull off one of the greatest military feats ever.

In 218 BC, following a 5-month, 1000-mile trek from Catalonia to an unnamed Alpine pass, Hannibal surveyed the Piedmont plains. He proclaimed to his troops: “You will have the capital of Italy, the citadel of Rome in the hollow of your hands.”

Known today as the “father of strategy,” Hannibal was a brilliant Carthaginian military commander and tactician. He understood the complexity of human behavior. And he knew well the strengths and vulnerabilities of his opponent. Attacking Rome in a sea invasion was risky. But Rome considered the Alps as a secure natural barrier and Hannibal’s invasion from the north was the perfect starting point for a surprise attack.

No Carthaginian histories from the period survive. And the accounts of Greek historian Polybius, written about 60 years after Hannibal’s crossing, and Roman historian Livy, written from the comfort of Padua another 120 years later, are understandably vague as to which pass Hannibal used to cross the Alps.

Over a dozen competing theories have been proposed in just the past 200 years by academics, statesmen, and military commanders. Many have walked the rival routes with Polybius’ Histories in hand, scouting out the topographic features he describes. An exceptionally high pass, a narrow gorge, white or bare rock, a clearing near the pass with year-round snow where 25,000 soldiers could have camped, and a steep slippery descent on the Italian side.

In the last forty years, much of the attention has shifted to the 3,000-meter Col de la Traversette as the most likely site of Hannibal’s crossing of the Alps. Aerial and satellite photography, plus carbon dating of fecal samples from a peat bog at 2,580 meters where Hannibal could have grazed his horses and mules, provide supporting evidence for Col de la Traversette as the leading candidate.

Finding elephant dung on the pass would be the smoking gun. But that hasn’t happened yet. Until we do, I will be crossing the Col de la Traversette this summer with Polybius in my backpack and photographing the topography that aligns with his account. I’ll be traveling lighter than Hannibal’s troops. I’ll be protected by Gore-Tex rather than metal armor, and Vibram soles instead of leather sandals. The crossing will take me the better part of a day and I may never be out of cell range. But the ease of my crossing the Col de la Traversette will only increase my awe and admiration for Hannibal’s astounding feat.

You can look forward to field reports on our hiking blog and updates this summer as Greg Witt crosses the Col de la Traversette in search of Hannibal.