Through Switzerland On the Trail of Bond, James Bond 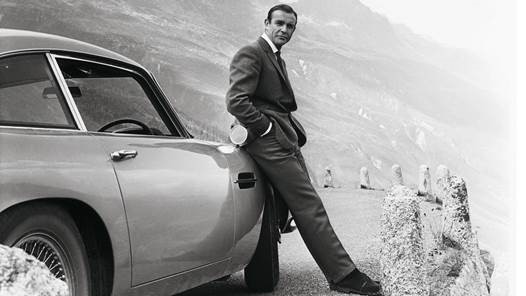 James Bond, Half-Swiss, Knows His Way Around the Alps.

As you see Agent 007 zipping over an Alpine pass in his Aston Martin, it should come as no surprise to any James Bond fan or any Alps traveler that his creator—author Ian Fleming—had a strong attachment to Switzerland and the Alps. Fleming attended the University of Geneva, where he had a romance and was engaged to Monique Panchaud de Bottens, a woman from nearby canton Vaud. So there was certainly a trace of autobiography when Fleming later described James Bond as half-Swiss, son of a Scottish father and a Swiss mother, a Monique Delacroix from Canton Vaud—a piece of Bond trivia which also explains why 007 speaks fluent French.

Fleming returned to Switzerland frequently as he was writing his James Bond novels and short stories, and Swiss locations work their way into several James Bond movies. Fleming makes references to James Bond’s Swiss watch—a Rolex. And let’s not forget that the original and quintessential Bond Girl, Ursula Andress (often called Ursula Undress by Brits) was Swiss, born in Ostermundigen near Bern. Ursula’s scene-stealing emergence from the water in a white bikini was so iconic and memorable it was copied by Daniel Craig in Casino Royale.

As you watch the latest Bond thriller, now’s a good time to catch up on your Bond history, and remember those great scenes filmed in Switzerland. Here’s a quick rundown:

The most jaw-dropping opening scene from a James Bond movie, and one of the best stunts in film history occurs when Pierce Brosnan, in his first outing as Bond, does a swan dive off a towering dam in Russia. Actually, the scene was filmed at the Contra dam in the Valle Verzasca in canton Ticino. The dam sits at the entrance to the valley, which you’ll certainly enjoy exploring in a leisurely fashion. But if you want to get the ultimate Bond adrenaline rush, you can make the leap off the 220m dam just like Bond did—It’s now the site of the Goldeneye bungee jump.

The opening scene of this movie has Roger Moore’s Bond set in Austria and being chased on skis by Russian agents—and since Bond is half-Swiss, you’d expect him to outski the Commies. But the scene was shot on the slopes around St Moritz, until the final scene when he skis off a cliff and opens a parachute—That was filmed in Canada.

Although Australian actor George Lazenby, only had one outing as Bond, and is generally viewed as a lesser Bond, the film still holds up well, and the ski chase scene is still regarded as one of the best Bond chases of all time. In the movie Bond is taken to Blofeld’s (Telly Savalas’) “allergy clinic” on a peak called Piz Gloria. The word “piz” comes from the local Romansch dialect of Graubünden meaning “peak,” suggesting that the setting is near St Moritz, but it was actually filmed on the Schilthorn, a 2970-meter peak in Switzerland’s Bernese Alps. Bond’s escape takes him down the slopes below the Schilthorn and the Mürren ski area.

The film was shot from October 1968 to May 1969 prior to the opening of the Schilthorn mountaintop complex, and the siting fees helped fund the completion of the revolving restaurant. After the 1969 release of On Her Majesty’s Secret Service, the restaurant decided to keep the Piz Gloria name and capitalize on its Bond connection. Today you can visit the interactive Bond World exhibition, watch clips from the film, and relive the adventure in one of Switzerland’s most popular destinations.

Other key Swiss sites in the film include nearby Grindelwald, Lauterbrunnen, and city locations in Bern.

Switzerland plays prominently in Goldfinger. The quintessential Bond chase takes place on the Furka Pass and into Andermatt as 007’s Aston Martin, with more gadgets than a Swiss Army Knife, chases Goldfinger’s Rolls Royce.  Ever since that scene, the Hotel Belvédère on the Furka Pass over has drawn Bond fans and classic sports car drivers from all over the world.

In other scenes, Bond stays at the Hotel des Bergues in Geneva. He leaves Tilly Masterson in Andermatt at a gas station which has since been torn down. And Goldfinger’s Auric Enterprises headquarters is actually an aircraft factory in Stans, outside Lucerne.