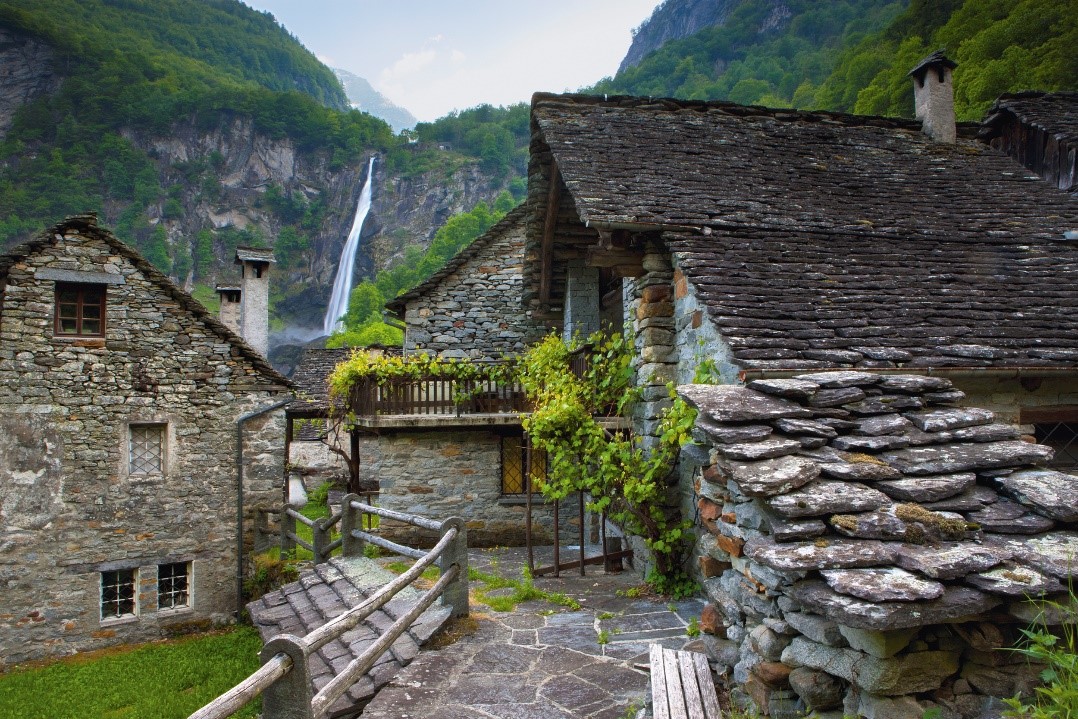 When it comes to beautiful tiny villages, Ticino is a standout. And it deserves our full attention. In a recent post on The Most Beautiful Tiny Villages in Switzerland, I intentionally omitted the ancient villages in the traditional valleys of Ticino, Switzerland’s southernmost and Italian-speaking canton. But now it’s time to give them their due respect.

These valleys radiate to the west and are easily accessible from Locarno Switzerland. From north to south the valleys are Valle Verzasca, Vallemaggia, Valle Onsernone, and Centovalli. The largest of these, Vallemaggia branches out into four distinct valleys about halfway up the main valley. These remote branches, Val Lavizzara, Val Bavona, Val Rovana, and Val di Campo, hold some of the region’s most authentic charms.

These beautiful and traditional valleys in Ticino and their dozens of tiny villages were secluded from the outside world for most of the last two thousand years, which allowed them to develop their distinctive, linguistic, cultural, and architectural traditions independent of the regional ruling power of Romans, Lombards, and the Dukes of Milan.

The peaceful valleys grew and prospered through the 1840’s. But, by the late-1800s, due to floods, food shortages, and economic hardships, many families left the valleys of Ticino. Others emigrated to Australia and America, enticed by the gold rushes of late 19th century. A declining population left many of these traditional villages virtually abandoned.

Many of the lovely stone houses, built during the 18th century and first half of the 19th century, known locally as rustici, have been purchase by outside investors in recent years and renovated as vacation homes, retreats and rentals—a perfect getaway for those who want to step back in time and enjoy a relaxing setting.

Nestled against the hillside at the top of Valle Verzasca, Sonogno is both a thriving tiny village with shops, restaurants, and B&Bs as well as a kind of living history museum revealing the village’s 800-year history. The Genardini house hosts the Museo di Val Verzasca, and the old communal oven is still in use today. In the Casa della Lana (wool house) wool is carded and died as it has been for centuries to make artisan products. Don’t miss a 10-minute walk up the valley to the Froda waterfall, then treat yourself to lunch at Efra, a grotto restaurant serving local specialties.

The Val Bavona is a branch of the Vallemaggia, but retains its own wild authenticity. It’s a popular walking destination where you can walk the length of the valley in about 5 hours, stopping at intriguing villages and restaurants along the way. Starting in Bignasco, and walking upvalley, you’ll arrive at Ritorto in a little over an hour. It’s a must for a photo stop, but there are no shops or restaurants, so you’ll want to continue another ten minutes up the valley to Foroglio for lunch or a snack.

The scenic show-stopper in Foroglio is the Cascata di Foroglio, an 80-meter waterfall that plunges from the hanging valley before flowing into the Bavona River. Enjoy lunch at La Froda, a grotto restaurant in view of the falls, then make a short loop walk through the village with a stop at the Oratorio di Forogio, the village church.

Sonlerto is set in a wide part of the Val Bavona, so it’s surrounded by meadows and farmland. It’s also a bit more spread out than some of the other tiny villages in the valley. Because of the economic value of the pasture, early settlers built their houses between the boulders of a prehistoric landslide to free up more land for grazing. Don’t miss the 16th century oratory of Gannariente in the heart of the village.

With a population of just 12 people the hillside village of Corippo, in Valle Verzasca, is the smallest village in Switzerland. More than any other village in the valley, Corrippo has beautifully safeguarded the traditional architectural heritage of the valley. For which it has been declared a national monument. In its early days, Corippo was a center of help production which was used in the textile trade. Work is currently underway to turn the village into a “scattered hotel” (albergo diffuso) as part of a $6.5 million project to promote sustainable tourism.