Why is CH the Country Code for Switzerland? 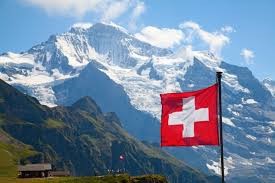 Driving around Europe you’re likely to see some cars with a CH sticker on the back. Or maybe you’ve seen the ‘.ch’ internet extensions for Swiss-based websites. The Swiss Franc is known as the CHF. And the international registration code for Switzerland is CH. What’s that all about?

If you were to think that CH stands for cheese or chocolate, you would be wrong, but you would have lots of company. In fact, CH stands for Confœderatio Helvetica, or Helvetic Confederation in English.

What does Helvetica mean anyway?

The word Helvetic comes from the Helvetii a Celtic tribe that occupied the Swiss Plateau in antiquity. When that region was conquered by Rome in the 1st century BC, it became the Roman province of Helvetia, which essentially disappeared by the 5th century with the fall of Rome. By the time the Swiss Confederation was formed in 1291, Helvetica was a long-forgotten name.

When the French armies overran Switzerland in 1798 they renamed the area the Helvetic Republic in an attempt to foster the notion of a grand European empire with grand and historic roots. The Swiss resented attempts to impose a central authority over their self-governing cantons, so the Helvetic Republic was abolished in 1803 and returned to being a confederation.

Even though the Swiss didn’t care much for Napoleon they kind of liked the name Helvetic Confederation. And when the new federal state and constitution were created in 1848 the Swiss decided to keep the old name, Confœderatio Helvetica, which continues today as one of the nine official names of the country. It’s a unifying name in a dead language that taps into Switzerland’s heritage and history.

The Many Names of Switzerland

What are the other eight names, you ask? In a country with four national languages there are four official names:

And then there are the four abbreviated or popular names in each language:

So there you have the nine proper names for the Switzerland. What’s the only name that’s not one of the official or popular names?—Switzerland—the Anglicized name of the country which is so fascinating!

This is why you will find the abbreviation “CH” on motor vehicles, internet addresses and online. As Switzerland encompasses German, French, Italian and Rhaeto-Romanic linguistic and cultural areas, it has opted for an international label with its Latin name. In this way, none of the four official languages are preferred over the others as the official Switzerland country code.