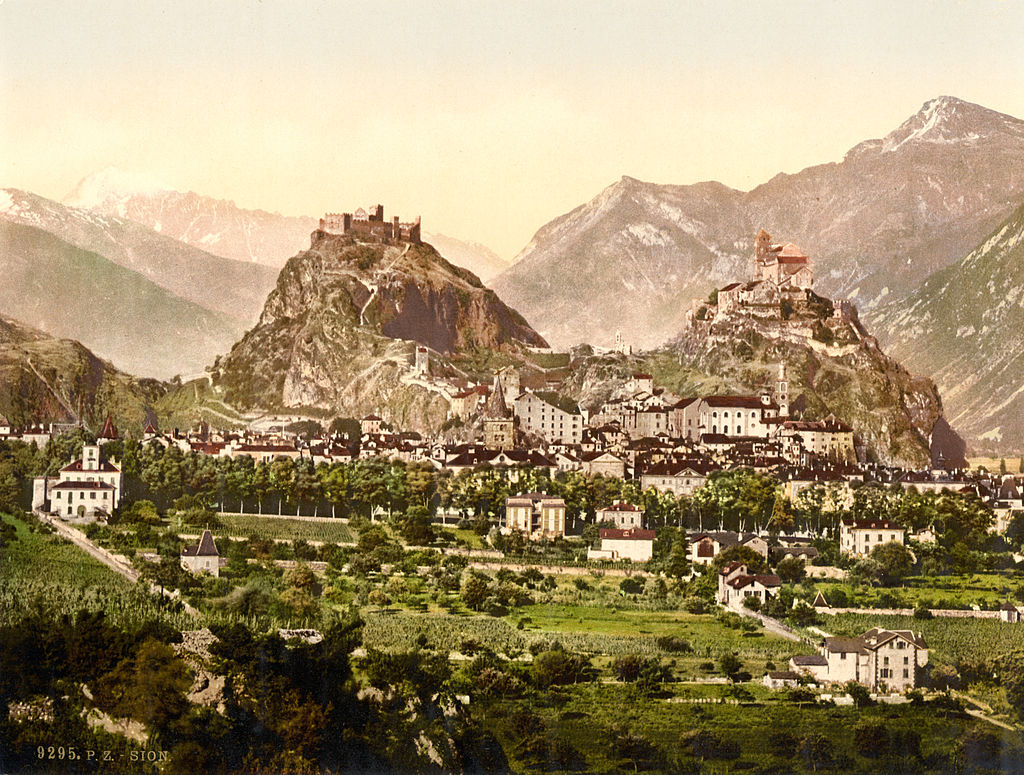 Switzerland is picture perfect, which explains why there are so many vintage postcards of the country’s stunning scenery. After all, the towering mountains and the charming villages do half the photographer’s work!

If you’re like us, you love looking at old postcards and sending them to your friends and family. So today, we’re sharing something special with you. From shots of iconic mountain peaks to images of quaint cottages, here are some of our favorite vintage postcards from Switzerland.

The above photo is a vintage postcard of a chalet in Treib, on the shores of Lake Lucerne. Taken sometime between 1890 and 1900, this was originally a black-and-white shot that was later colorized through photochrom processing.

Interestingly, a Swiss man named Hans Jakob Schmid invented the photochrom process. He added color to images by transferring black-and-white negatives onto litho printing plates, and his new process remained popular for quite some time in Switzerland. In fact, this is how photographers processed all the vintage postcards we’ll discuss in this post.

The next vintage postcard on our list comes from Bex, Canton Vaud. This image shows off the Grand Hôtel des Salines, which opened in 1869 to accommodate well-off guests who wanted to visit the thermal baths in nearby Lavey-les-Bains. Two of the hotel’s guests were Leo Tolstoy and Friedrich Nietzsche, so the hotel had quite the celebrity following!

Jaw-dropping views await anyone who visits the high-elevation village of Mürren. Located in the Bernese Oberland, it’s not too far from some of the most famous peaks in the Alps, and a few scenes of the Bond film “On Her Majesty’s Secret Service” were even filmed here.

This vintage postcard shows off the nearby peaks of Eiger, Mönch, and Jungfrau.

At 6,578 feet (2,005 meters), the Simplon Pass will take your breath away — and that’s been the case for hundreds of years! Originally just a small back road,  Napoleon’s engineers expanded the mountain pass so it could be used for artillery piece shipments. Then, by 1970, Swiss engineers had improved the road to make it usable all year long, even during the long winter.

Snapped sometime between 1890 and 1900, this postcard is so picturesque that it still appeals to us today. Check out that view!

William Tell is the stuff of Swiss legends. If you don’t know his story, you can read an account here, but we’ll give you the quick version. Back in 1307, Tell refused to bow down to an Austrian appointed to rule over Altdorf in Canton Uri. The Austrian threatened to kill Tell and his son, but offered to pardon them if Tell could shoot an apple off his son’s head. Tell succeeded, but the angry Austrian sentenced him to life in prison. Then, as they sailed across Lake Lucerne toward a dungeon, a storm came up, and Tell wrecked the ship. Then, for good measure, he led the Austrian onto shore and killed him.

Of course, there’s no historical evidence for any of that. But according to legend, Tell was from Burglen, Canton Uri, pictured in the vintage postcard above. If his hometown was that beautiful, we don’t know why he ever would have left!

Here, the photographer shows us a view of the peaks behind a few hotels in Leysin, a small village in French-speaking Switzerland. Not far from Lake Geneva, Leysin is also home to a ski resort, so it’s a great destination throughout the entire year.

Running from northern Switzerland to the southern canton of Ticino, the Gotthard railway is one of the most famous lines in the country. Near Wassen, a small town in Canton Uri, the tracks follow a double loop to help trains make a steep ascent.

This postcard provides yet another example of an image colorized through the photochrom process described above.

Last on our list: Sion, the capital of Canton Valais, is another stunner. The city’s hills are graced with the iconic Castle Tourbillon (left) and the Castle of Valeria (right), and the Old Town is home to many historical monuments. Sion is sunny and charming, with mountain views visible from virtually any spot in the city.

This photo dates back to 1895 (or thereabouts), and while the world has changed a lot in the past 123 years, these views haven’t!

If you liked exploring Switzerland through these vintage postcards, you’ll love our photography and plein air painting tours! Let your creative juices flow, and get to know a different side of the Swiss Alps with us. (And check out this post for photography tips.) We can’t wait to see you in Switzerland!