The most famous mountain in the Alps — the Matterhorn 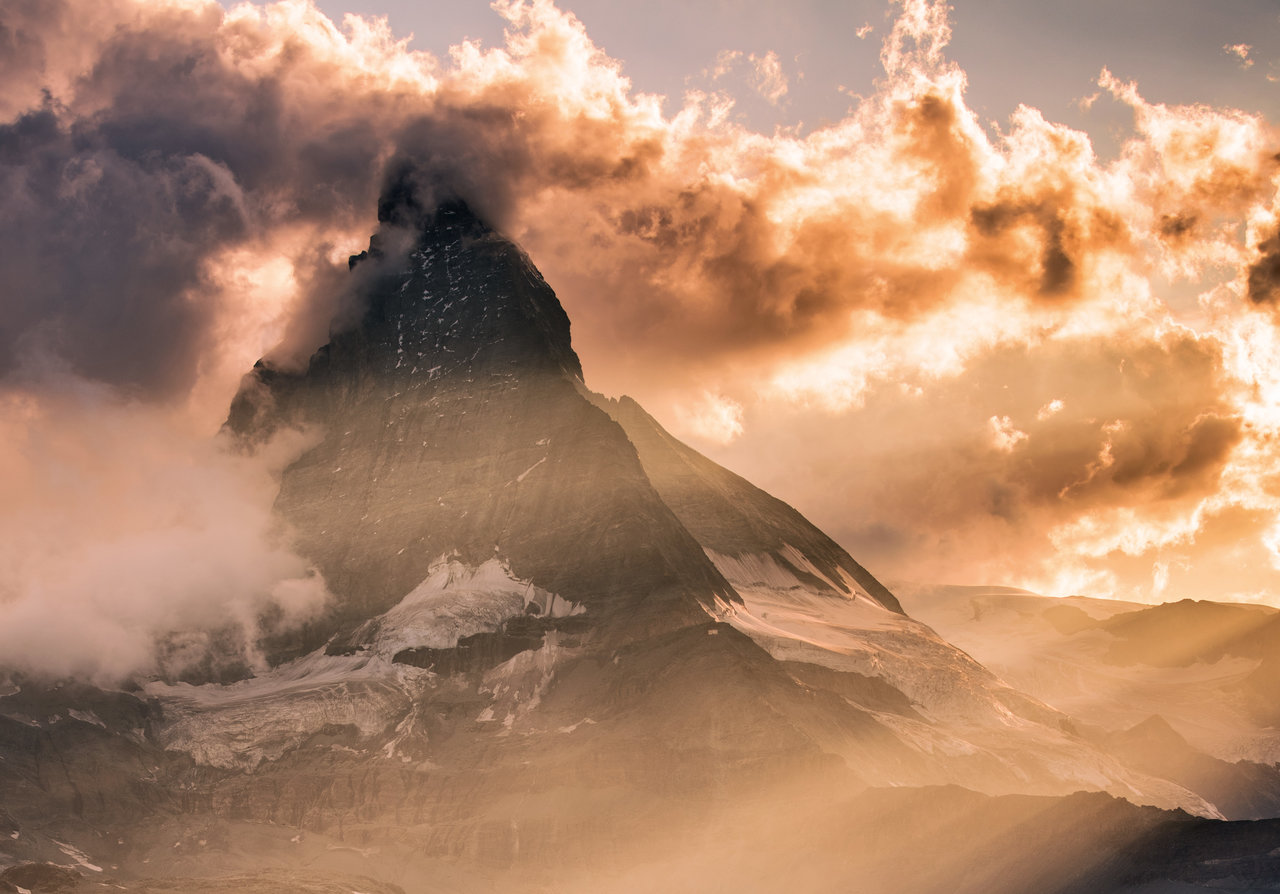 It’s the mountain of mountains, the king of the Alps, the best-known peak in Europe. Everyone has heard of it, and many hikers have dreamed of exploring it. If you belong to their ranks, then it’s time to get to know the Matterhorn a little bit better.

No matter what you’re wondering about this mountain, we know the answer! And if you want to see it with your own two eyes, we can help you with that too.

The Matterhorn’s geography and geology

Located just southwest of Zermatt, Switzerland, the Matterhorn’s iconic peak is 14,692 feet (4,478 meters) tall. The mountain is shaped like a pyramid, and its four faces align almost perfectly with the cardinal directions. The north, west, and east faces are in Switzerland, but the south face actually lies in Italy.

The Matterhorn’s story began hundreds of millions of years ago, when our planet had vast oceans and two continents. Back then, sedimentary rock lay deep below the surface of the Tethys Ocean. But that rock wouldn’t remain at the bottom of the ocean forever. After millions of years of continental drift, it formed the lower two-thirds of the Matterhorn.

But a completely different type of rock makes up the mountain’s top third. Interestingly, geologists have determined that the upper rock originated in Africa, then broke off in a massive fragment and collided with the Alps. The sediments buckled under that intense pressure to become gneiss, a metamorphic rock.

After the Matterhorn’s initial formation, its shape was indistinct, rounded, and hill-like. Later, glacial erosion whittled the mountain into today’s recognizable pyramid form.

Let’s fast-forward to a modern timeline.

In July 1865, Edward Whymper and his team made the first successful summit of the Matterhorn. But tragedy struck on their descent, when four climbers (out of seven) fell to their deaths.

Just two days later, Jean-Antoine Carrel reached the summit after starting on the Italian side. The ascent is much more technical for hikers who set out from Italy, but Carrel’s team proved that it is possible.

In today’s world, up to 4,000 people attempt to scale the Matterhorn every year. Of those climbers, between 300 and 400 hire a guide. Only about 20 guided clients fail to summit, but up to 65 percent of self-guided hikers turn back partway through the hike. The Hörnligrat is the most popular route for today’s hikers.

Would-be climbers should be in good shape, and they should also be well acclimated. After all, 500 people have lost their lives while climbing this mountain, although the number of fatalities has tapered off in recent years.

Weather conditions can change rapidly on the mountain. Temperatures can drop at any time, and storms can roll in without warning. Because of this, anyone hoping to summit the Matterhorn (or even view it from Zermatt) should spend several days in the area to increase their chances of success.

Casual hikers can enjoy views of the Matterhorn on the Five Lakes Walk, while day-trippers can soak in their surroundings from the station at the top of the Gornergrat railway. In Zermatt, there’s a way for everyone to experience Switzerland’s most famous landmark!

Ready to see the Matterhorn for yourself? Pack your favorite hiking shoes, and meet us in Zermatt! We’ll show you the ropes (pun intended) on many of our tours, including Best of the Swiss Alps, Haute Route, Scenic Alps by Rail, Eiger to the Matterhorn, and Swiss Bliss.

See you in Switzerland!