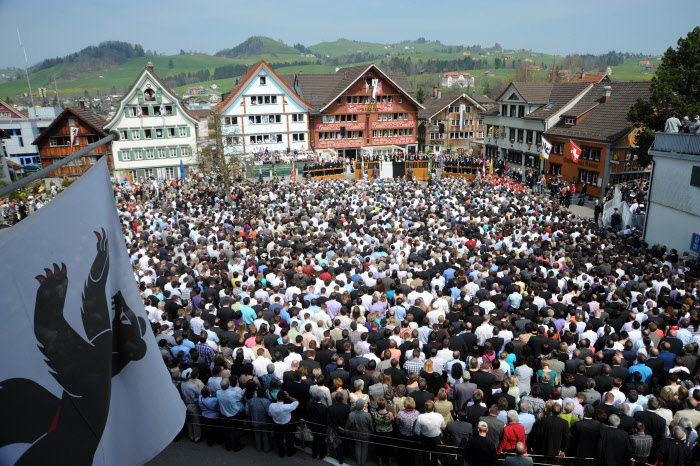 In Switzerland’s most traditional canton, voters gather every spring for an open-air parliament, where they debate, vote, and elect officials. The Landsgemeinde system has been in place since the 13th century, and it’s happening again this weekend.

If you’d like to learn more about this unique form of democracy, then you’ve come to the right place. Read on!

Appenzell Innerrhoden is an interesting place. It’s the most traditional region in Switzerland, as well as the country’s least populous canton. But the low population is a blessing in disguise, since nearly half of the eligible voters squeeze into a small square for open-air voting every year.

The Landsgemeinde takes place on the last Sunday of April. Anyone can observe the process, but only the canton’s voters can enter the inner circle. They show a voting card, then join their fellow electors in the center of the square.

From there, the voters make speeches on the issues. They choose their officials. And they vote on referenda, like deciding in 2009 to impose hefty fines on naked hikers.

If there’s an obvious majority vote, then the parliament will go on to the next issue. If not, someone will count each and every hand before moving on.

About 3,000 people participate every year, but women have only been involved since 1991. Although the Swiss government extended federal voting rights to women in 1971, the men of Appenzell Innerrhoden refused to let them vote on cantonal issues. Finally, in November 1990, Switzerland’s highest court intervened. In April 1991, Appenzeller women participated in the Landsgemeinde for the first time.

And 2018 is yet another big year in Landsgemeinde history. For the first time,  a sign language interpreter will be on the scene to translate the proceedings. This will improve the experience for about 12 hearing-impaired citizens.

Planning on attending, and trying to choose the perfect outfit? Most people wear their Sunday best, and many of them carry a sword, in a nod to tradition.

Interestingly, Appenzell Innerrhoden isn’t the only Swiss canton that still uses this voting system. Canton Glarus always holds its own open-air parliament on the first Sunday in May.

Explore Appenzell with us

Take a minute to think of all the stereotypes you’ve heard about Switzerland.

Most of those stereotypes apply in this charming region, where the mountains are tall and the villages are quaint. It’s a gorgeous corner of the world.

You’ll love getting to know Appenzell, and we’d love to introduce you. If you’re dreaming of great hikes, good views, and delicious food, then join us on Appenzell Inn-to-Inn for the trip of a lifetime!