History of chocolate: a success story straight from Switzerland 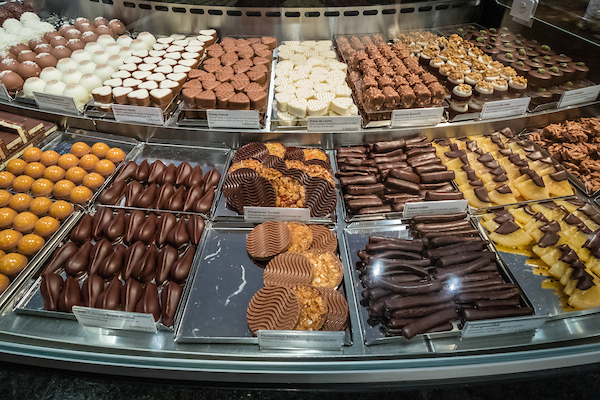 Lindt. Toblerone. Nestlé. Milka. Take a bite of mouth-watering Swiss chocolate, and you might think that you’ve died and gone to heaven. And while the history of chocolate is quite the tale, it wouldn’t be the same without the help of several influential Swiss chocolatiers. After all, they’re the ones who perfected the art of making chocolate.

If you’re hoping to learn more about the history of chocolate before eating your way through Switzerland, look no further!

The history of chocolate began with the pre-Olmec cultures of present-day Mexico. They were the first people to consume chocolate of any sort, way back around 1900 BC. But rather than eating chocolate, those cultures brewed cacao beans in a bitter drink.

For many centuries, the bitter drink was the ultimate status symbol in Mesoamerica. Later, conquistadors arrived and took cacao beans back to Spain. The Spanish sweetened the drink by adding cinnamon and sugar, but chocolate was still a luxury that few could afford.

After a Spanish princess married French king Louis XIII, the chocolatey drink began to spread across the continent. Within a couple hundred years, it was a favorite treat among European aristocrats.

1828 was a big year in the history of chocolate. Dutch scientist Coenraad Johannes van Houten invented the cocoa press, which made it easier to produce powdered chocolate. Even better, his invention made mass production possible for the first time.

In 1876, a Swiss man named Daniel Peter created milk chocolate by combining — you guessed it — milk and chocolate. Not longer after that, he joined forces with Henri Nestlé, and the business partners began mass-producing their new delicacy.

But chocolate — even the best varieties of the age — was still chewy and hard, so eating it was quite the jaw workout. No one had ever tasted melt-in-your-mouth chocolate, simply because it hadn’t been invented. But that changed in 1879, when Swiss chocolatier Rudolf Lindt made a major breakthrough.

One Friday, Lindt left his chocolate factory without turning off the machinery. No one knows why exactly his machines stayed on — forgetfulness, apathy, hastiness?

By the time he returned on Monday, the machines had been stirring his chocolate for several days. Its consistency was silky, and it smelled delicious.

When Lindt sampled the chocolate, he was enraptured. It was impossibly sweet, and it even melted on his tongue. It was the beginning of a new age of making chocolate.

Ever since then, chocolatiers around the world have been trying to catch up. They’ve invented lots of delicious truffles, candy bars, and desserts — but so far, no one’s chocolate matches the heavenly treats that the Swiss make!

Taste it for yourself

If this post has whetted your appetite, then it’s time to visit Switzerland for the best chocolate you’ll ever eat! We’d love to see you on our food tours — Cheese, Chocolate, and the Scenic Alps or the Tour de Chocolat. From visits to tastings, demonstrations, and workshops, this vacation will put any chocoholic in seventh heaven. Bon appétit!